Each week, we scour our network to find the best stories in high school sports. Check out some of our favorites from the past week:

The Bruins boys basketball team claimed a 52-50 win over Oak Hill last week with a put-back buzzer-beater by Dane Baker at the horn.

The 2021 Highland Gymnastics team will forever be known as the first Highland team to advance to the District competition in the sport.

Coach Nancy McKouen joins West Bloomfield with over 20 years of coaching experience, both at the collegiate and high school level. 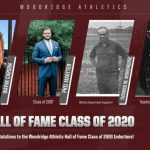 Counting down the best sports graphics across the VNN networkNational